Bringing enjoyment to the people

Reiner is our gaming wizard. Supported by Karen and Britta, as well as our creative test players, Reiner is constantly designing many exciting new games that are brought to life by our trusted publishers in many different languages all over the world.

Though games have been a big part of his life since he was a child, Reiner initially studied to become a doctor of mathematics and then worked as a banker in England. When he reached 40, he decided it was time for a major change. Life should be fun. Games are fun. And people should have fun with games. So, from then on, he fully dedicating his life to game design, and his motto became: Bringing enjoyment to the people!

And that is what he and his team hope to achieve with every new game they design. 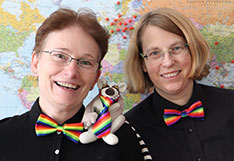 Your first point of contact when you get in touch with us will either be Karen Easteal or Britta Stöckmann.

Karen is our operational wizard, keeping us organised whilst liaising with our designers, partners and clients. She is also very good at hiding the office chocolate supply (normally in her handbag!).

Britta is our licensing wizard, liaising with our publishers to bring our games to the worldwide markets. She quickly discovered where Reiner hides his bow tie collection (but she doesn’t have a handbag!).

Our office mascot, the curious Inspector Cotta (in the middle of the picture above) is our Facebook wizard and supervises all business activities (if he is not asleep or munching on lemur snacks).